The complete book has been made available to read online below.

Please write to us with your full postal address if you would like to have a free hard copy: admin@islamicsolutions.com 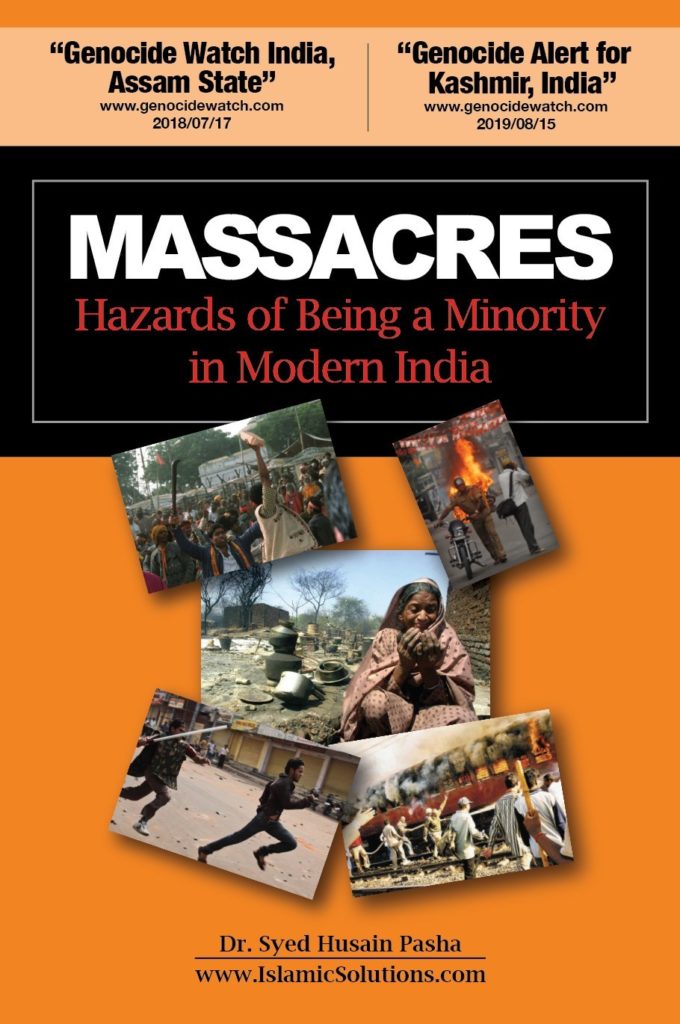 For the past over six months, Indian Government’s Ongoing Genocide of eight million Kashmir Muslims is playing out right before everybody’s eyes. The world has never seen anything like this before. Nearly, a million-strong Indian military has turned the lush Kashmir Valley into a Concentration Camp. While this genocide is unfolding in slow motion, the world is watching in stupefaction. Muslims of the world are watching. Western Powers are watching. Most of World Media, too, are watching. Just as everybody did when Hitler and the Nazis annexed Czechoslovakia and turned Germany into a boiling cauldron of racial hate and horror. But soon the world paid a horrible price for its culpable silence and cowardly inaction. Eventual toll was nearly 100 million human lives.

But Germany was not a nuclear power then. And today’s India, taken over by a gang of Fascist hate-mongers, is. And so is neighboring Pakistan, which is eyeball-to-eyeball with India on India’s illegal annexation of Kashmir and Genocide of Kashmir Muslims. If, God Forbid, either one of these two nuclear-armed nations commits a nuclear error or misadventure of any kind, the rest of the world will be walking around in bandages for decades to come.

Silence and inaction in the face of ongoing genocide of eight million Muslims in Kashmir bodes clear culpability on the part of so-called Muslim Governments, Western Powers, the United Nations and World Media.

MASSACRES
Hazards of Being a Minority in Modern India

All rights reserved. No Part of this publication may be reproduced, stored in a retrieval system, or transmitted in any form or by any means, electronic, mechanical, photocopying, recording or otherwise, without the prior permission of the copyright owner.

Chapter 3 - If this Is a Riot, What Then Is a Massacre, a Pogrom or a Crime Against Humanity? >>>

Chapter 5 - What Communication Covers Up >>>

Chapter 6 - Anatomy of A Communal Riot in India >>>

Chapter 8 - Role of the Indian Police and Bureaucracy >>>

Chapter 10 - Police return to the Scene of the Massacres >>>

In the year 1528, the first Mughal Emperor Babur constructed a grand mosque in a part of North India called Ayodhya that came to be known as Babri Masjid, meaning a mosque built by Babur. Muslims continuously worshiped in that mosque for hundreds of years. Later on, some militant Hindu Supremacist Fascist Organizations claimed the site of the mosque was actually the Birthplace of the Hindu god Ram, a claim that led to anti-Muslim riots in many parts of India. The courts intervened and stopped Muslims from worshiping in the Babri Mosque. In 1992, a Fascist Hindu Supremacist Mob with ideological affinity to the Fascist Anti-Muslim Organization Rashtrya Swayam Sevak Sangh (RSS) attacked the Babri Mosque and demolished it. Muslims sought legal redress. In 2019, India's Supreme Court issued two rulings that appeared to contradict each other. On the one hand, it ruled that the mosque site should be handed over to the Hindus for the construction of a Ram Temple. On the other hand, it held that the Fascist Hindu Supremacist Thugs that attacked and demolished the mosque committed a criminal act. This was a sad and colossal cave-in on the part of India's once-proud justice system to the present Fascist BJP Indian Government of Prime Minister Narendra Modi and Police Minister Amit Shah.

At the Most Blessed Feet of
Sayyidina Muhammad, Rasulullah,
Sallallahu Alaihi wa Sallam!

This truly humble apology-of-a-book, fruit on-and-off of nearly 30 years of work,
which is neither fully poetry, nor fully prose,
is left at the Most Blessed Feet of Sayyidina Muhammad, Rasulullah, Sallallahu Alaihi wa Sallam,
hoping for a Glance of Rahmah and Karam from him,
For, he is Rahmatul Lil-Aalameen, and he is
Akramul-Khalqi Ajma'een,
And from his Rabb who is Rahman and Rahim
and Rabbul Aalameen,
with the Greeting, As-Salaatu Was-Salaamu
Alaika Ya Sayyidi, Ya Rasulallah,
the way Busiri's Qasidah Burdah was in the
13th Century of the Christian Era, in a dream, and the way the Qasidah Baanat Su'adu was, in person,
by Ka'b, son of Zuhair, over 1400 years ago, during the
Lifetime of Sayyidina Muhammad, Rasulullah,
Sallallahu Alaihi wa Sallam,
at Yathrib, the City of the Prophet, Sallallahu Alaihi wa Sallam!

You can call Massacres: Hazards of Being a Minority in Modern India Dr. Pasha's latest book. But it is not really. It may even be his first -- and oldest -- book.

The Massacres book has been in the making for nearly half a century before Dr. Pasha finally stopped tinkering with it and gave his consent to go to print with it.

The Massacres book is not like most other books you may have read, or even like any other book that Dr. Pasha may have written.

The book is almost a live, blow-by-blow chronicling of the gruesome reality of the Genocide of Indian Muslims that has been ongoing in India for over 75 years.

Call the book Massacres a verbal videography of the repetitive massacres, and the most perverse pogroms, perpetrated on Indian Muslims in state after state and in city after city of India during and after independence.

One striking feature of the book is that it is written, throughout, without rancor or malice or hate. The tone of the book throughout is soft, sensible and moderate, considering the gruesome and diabolical nature of the reality that the book covers.

And the overall approach of the book is not only conciliatory but also positive, pointing out how the Indian Outrages and Atrocities against Muslims, no matter how terrible, despicable and disgusting, can still be viewed in the context of the larger and fundamental human propensity to violence, oppression and injustice.

It is precisely what Islam advocates, and it is what Islam is really all about.

And the essence of that approach is unvarnished truth at all times and unconditional and transparent justice for all, friends and foes, strangers and relatives.

It was this, the manifest Muslim character of overpowering honesty and integrity, fairness and justice, and not the so-called Sword of the Muslims, that really conquered the entire world for Islam.

And that is also how Islam took hold of the Indian subcontinent, going back all the way to the Seventh Century of the Christian Era.

To the best of our knowledge, there is no other book like Massacres: Hazards of Being a Minority in Modern India by Dr. Pasha. Read on and reflect!